Edit
watch 01:36
We're Getting Mutants in the MCU - The Loop
Do you like this video?
Play Sound

"Perhaps I never had the opportunity to to select another tree. Perhaps I was meant to select that tree regardless of my persistent character, Perhaps we are all trollies, forced to follow the path of the track to each of our destinations. I take solace in that thought.

Or perhaps, the tree chose me."

-John D. Rockefeller, A Recollection of the Tragedy

ROCKEFELLERTREETRAGEDY is the ninth and longest episode of Season One. This episode is different from the rest of the Season as instead of focusing on a National Monument, the episode instead revolves around the Rockefeller Center Christmas Tree Celebration, an Annual event that occurs in Rockefeller Center every Christmas.

ROCKEFELLERTREETRAGEDY's story is another a Lore-Dump Episode. Instead of telling us about a National Monument with Paranormal Properties, RTT tells us the tragic tale of the 1934 Christmas Tree Tragedy. The story is told to us through Two perspectives, a storybook written and narrated by a young girl named Virginia Arnoldson and a memoir written and narrated by John D. Rockefeller written 5 years after the tragedy in 1937. The video starts from Rockefeller's perspective and then transitions to Virginia's side, and from there rotates between their stories (During the transitions, I'll be home for Christmas by Jackie Gleason can be heard in the Background). At the very end, a short clip of the Center at night is included from decades later in the 1980s. 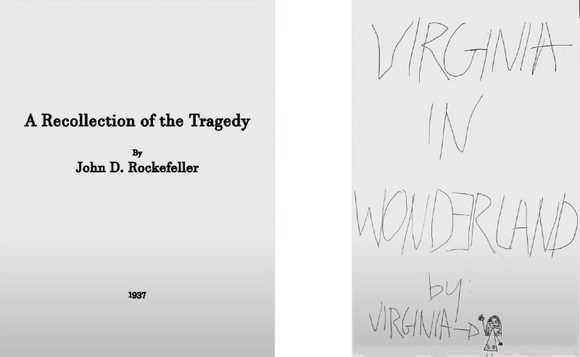 A Recollection of The Tragedy by John D. Rockefeller, 1937.

The Memoir begins with JDR giving an explanation of events leading up to the tragedy with how and why he Started the Tradition. In December 1931 Rockefeller was visiting the Center construction site, while there he witnessed the Workers collectively raising a Tallish Christmas tree, which they saved up form, at the entrance. Then they decorated the tree with strings of Cranberries, Buttons, and Tin Cans. Rockefeller likened the sight of the Tree as uncanny with the words: "A fir in the middle of No Man's Land". Moved by the sight of comradery and kinship of the Workers despite the Depression. Inspired, Rockefeller decided this to be a start of a Brand new tradition, and thus the following year, he traveled north in search of a Tree for the Center. 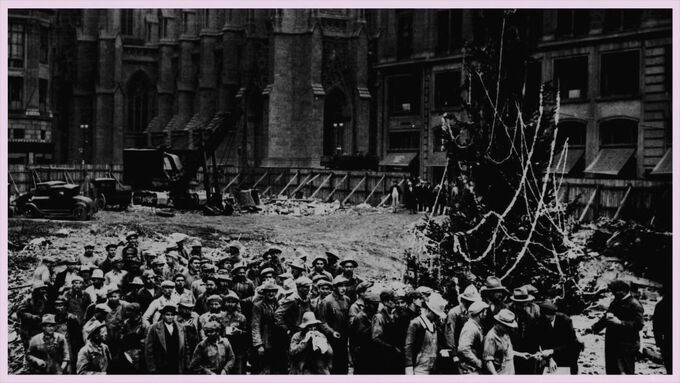 "Virginia in Wonderland" by Virginia Arnoldson

For Twelve days and Twelve nights, Mister Rockefeller looked for the best tree in the forest 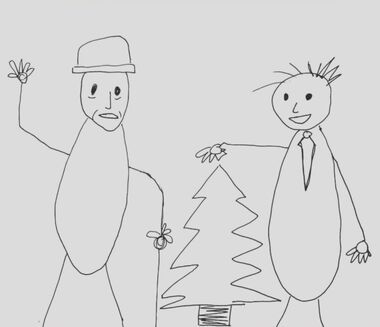 Rockefeller Worker 1: "How about this one Mister Rockefeller?"

Mister Rockefeller: "No, No, it's much too Short!" 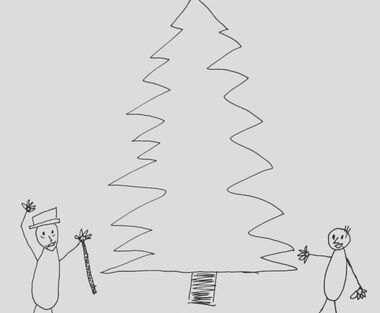 Rockefeller Worker 2: "How about this one Mister Rockefeller?"

Mister Rockefeller: "No, No, it's much too Tall!" 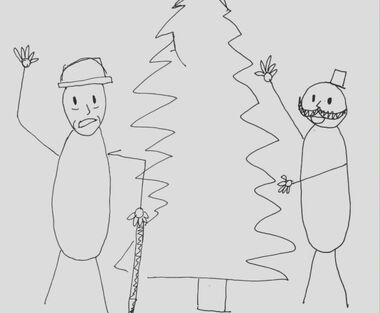 Rockefeller Worker 3: "How about this one Mister Rockefeller?"

Mister Rockefeller: "No, No, it's much too Average!"

Mister Rockefeller soon feared that he would leave empty handed. 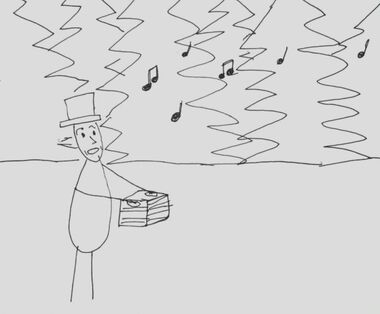 Then on the twelfth night, just as he was packing up his things, Mister Rocker heard the sweetest tune in the air.

It sounded as if the wind itself had fallen in love.

He and his men followed the song and found them selves at the base of a very, very special tree. 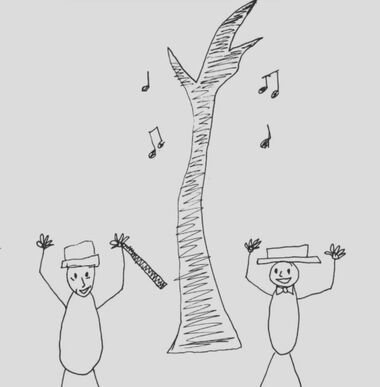 Rockefeller Worker 4: "How about this one Mister Rockefeller" 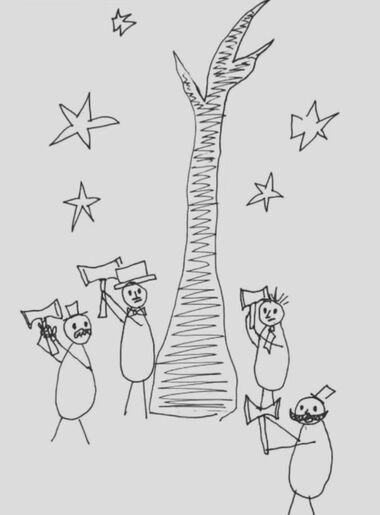 For the rest of the night, the men swung their axes at the Special Tree. 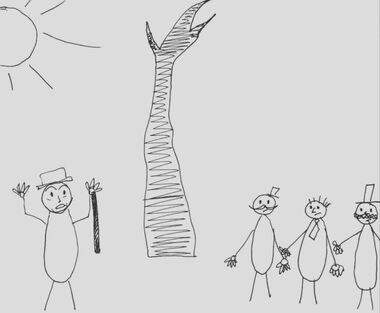 However, when the sun rose the next day, the Tree was still standing. Their axes had left no marks at all! 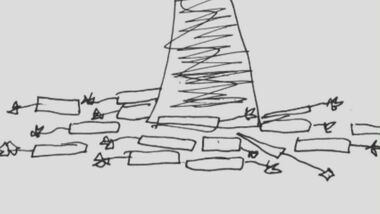 The next day, Mister Rockefeller and his men laid One Hundred sticks of Dynamite at the base of the Tree 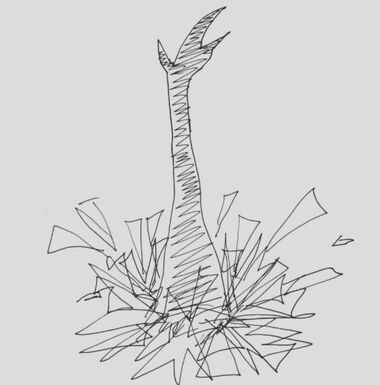 Yet, the Special Tree continued to stand.

So Mr. Rockefeller decided to hire the best team of grave-diggers to take the tree out of the ground. 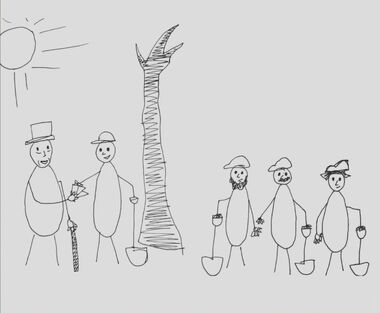 After a week of digging, they told Mr. Rockefeller; 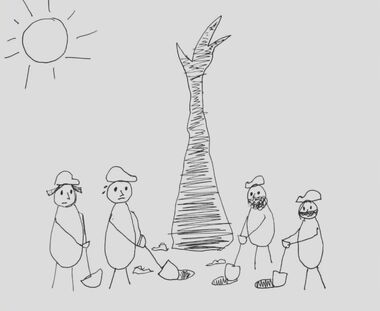 Chief Digger: "The tree will be out in three years at this rate"

Mr. Rockefeller was surprised, but he decided to let the grave-diggers work. 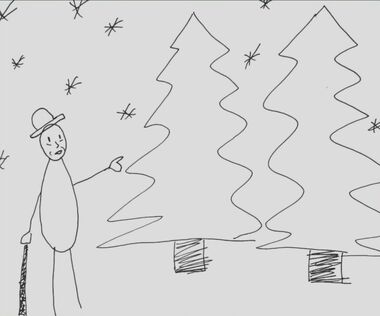 But by the fourth year, The Special Tree was ready to display. 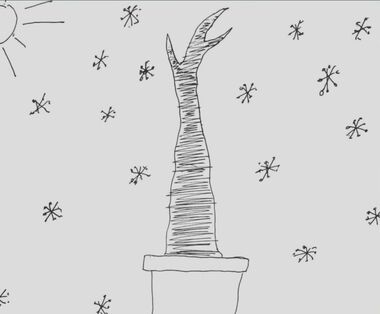 A Recollection of The Tragedy by John D. Rockefeller, 1937.

-Although primarily written by Virginia herself, the final draft of "Virginia in Wonderland" does contain words and phrases provided by her legal guardian for clarification.

-Construction of the Rockefeller Center began in early 1930, when pre-existing buildings in the area were demolished to provide space. The Center's original Christmas tree, raised by its own construction workers, was first seen by J.D. Rockefeller toward the end of this period of demolitions. Inspired, Rockefeller handpicked three trees for the next three Christmases (1931, 1932, 1933). The Special Tree would make its first appearance at the Center on the fourth year (1934).

The first tree at Rockefeller Center, erected by construction workers in 1931 shortly after the site was cleared. Above, the workers line up for pay beside the tree, adorned with garlands made by workers' families.
Community content is available under CC-BY-SA unless otherwise noted.
Advertisement